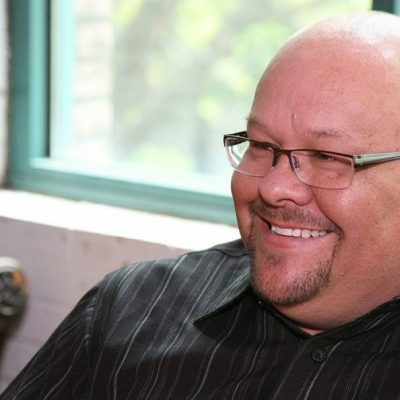 One of the best things about WordPress is the tight-knit, supportive community of designers and developers that has grown over the years. So how can you make the most of it for your business? Nathan Ingram, WordPress business coach and head of training at iThemes, tells us how.

Appearing on this episode with a wall of lanyards from past WordCamps behind him, Nathan is a familiar face at WordPress community events all over the US these days. Even though he fell into WordPress somewhat by accident –  his rise to becoming one of the most respected trainers and coaches in the business is a story of adaptation, overcoming impostor syndrome, and learning to play to his own strengths and let other people play to theirs.

How It All Started

As a child, Nathan wanted to be a scientist, although he was never exactly sure what kind. While he ended up going a different way when he grew up, he never lost his sense of curiosity, and he still considers himself a full-fledged geek and a “magnet for useless information”, all things that have served him well in the world of web development.

Having spent a number of years in ministry as a pastor, Nathan already loved teaching and public speaking, and he also did a lot of web design work for small nonprofits. Becoming a WordPress trainer wasn’t the plan, but as it turned out, his curiosity, geekiness and love of sharing knowledge made him the perfect candidate for the job.

The Advent Of WordPress

Nathan started out building websites in 1995 and did a lot of work prior to the CMS revolution. He used tools such as Dreamweaver and Fireworks for a long time, and saw himself as more of a visual designer than a developer. When WordPress came along, he was quite resistant to it, for a couple of reasons.

Firstly, Nathan found that every WordPress website tended to look more or less the same, and it was hard to use it to develop the unique designs he could make with other tools.

Secondly, he thought it would kill his business model. He was working primarily with small clients who kept him on retainer to make periodic changes to their websites.  He wasn’t sure how something like WordPress’ simplified content management would impact his livelihood.

Obviously, though, he changed his tune, and it happened around version 2.9, when Nathan first became aware of the huge array of plugins out there and how useful they really were. By the time 3.0 rolled out – he was sold.

After a chance encounter with Cory and Lindsey Miller at a WordPress event in Oklahoma City, Nathan was offered the chance to do a training webinar (his very-first one) in 2012. It seemed easy in theory; he loved public speaking, and his background as a pastor, he thought, would be all the preparation he needed.

However, it turned out webinars are a completely different beast from conventional public speaking, and Nathan felt more than a little lost without being able to gauge real-time responses or body language whilst talking into a webcam. When it was over, he says he was sure at the time that it was the worst thing he’d ever done.

The viewers and his hosts disagreed though, and they gave him a lot of encouragement to keep at it. iThemes asked him to do more and more webinars, eventually making him a regular instructor on their site. At the beginning of 2017 he became iThemes’ official host, where he does regular webinars, courses and live events.

The Key To Confidence

Moving into the training and coaching space was a bit of a learning curve, and Nathan dealt with his fair share of self-doubt.

“It's impostor syndrome, right? We all have it, and the more you do something, particularly something niche, you think it'll go away, but it just gets worse.”

So if practice doesn’t fix self-doubt, what does? Nathan says that the antidote is community, and that’s why he is so passionate about WordPress – the community is fantastic.

Positive community feedback was what got him to stick with the webinars and something he’s now more than comfortable with. That’s what makes up a major part of his business now. Nathan also stresses that while positive feedback is great, you need to be able to get authentic feedback from people you trust. Getting knee-jerk compliments from people isn’t helpful, and may take you off the right track.

You need a trustworthy support network to give you confidence boosts and reality checks, and you also need to check in with yourself to make sure you’re actually doing the work and honing in on the skills that you need to create output you can stand behind.

Advice For Younger Self

What would Nathan tell a younger version of himself? A variation on that same theme: learn how to rely on the people around you instead of expecting to have to do everything yourself.

Nathan stresses that one of the biggest benefits of a community is that you can play to and develop your own strengths while enlisting others around you for help to support you in the things that you’re weaker at. He says he’d have been much better at avoiding burnout if he’d learned to trust others to handle the things he couldn’t instead of beating himself up about having weaknesses. This is an important lesson a lot of freelancers and entrepreneurs.

The importance of community is strongly reflected in Nathan’s coaching approach. One of the coaching options that he offers is a program called “Advance”, where clients have their needs addressed partially one-on-one, and then partially in a small group of six or less.

In this group environment, they each bring one issue to the table, and together they look at potential solutions. One of the keys to this approach is opening every group meeting with celebrating successes. Nathan thinks this is something that WordPress folks need in their lives because the specific victories that come with web design are hard to explain to the uninitiated. This can be isolating, especially for freelancers.

Nathan also tells us that sharing issues with a group can help overcome impostor syndrome. It lets people know that they’re not alone in struggling. It also gives them the opportunity to realise that while they have problems and weaknesses that others don’t, they also have solutions and strengths that others don’t. This is a great confidence booster.

There are probably some people in this room, probably people listening to this podcast perhaps, who are one more bad client or one more bad month away from throwing in the towel. And I was there! I’ve been there! The thing is, all those problems are fixable.

Are you feeling frustrated, isolated, or like you’re the only one having a tough time with your business? You’re not alone – far from it, in fact! Here are the most common problems Nathan sees with coaching clients:

Be sure to tune in to hear the details of Nathan’s work with iThemes, some stories from his days as a pastor, some of the strangest industries he’s learned about through his clients, and more, all in this episode!