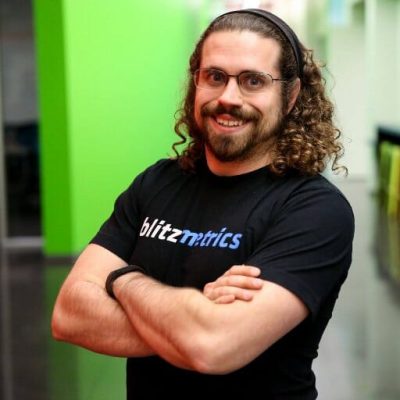 This episode of the WP Elevation podcast is not like the typical episode you’ll find here. That’s because I’m joined by Paul Sokol, a former Infusionsoft campaign builder and current thought leader and marketing automation nerd. Rather than cover the usual “where have you been?” and “what do you do now?”, Paul walks us through a number of marketing automation and campaign planning scenarios.

Paul Sokol has been working in direct sales for some time, though it was his years as an Infusionsoft employee (starting in 2011) where he learned to build campaigns and refine his skills in automation.

But as Paul explains in the podcast, it’s not enough to automate for the sake of automation.

“Automation is great, but if you can’t drive traffic to the pages and collect leads, it’s like having a Ferrari in the garage you never take out.” - Paul Sokol

That’s why Paul struck out on his own in 2016 and, more recently, joined BlitzMetrics full-time this year.

Automation is such an integral part of being in business and is often what allows you to close loops that are unnecessary to open in the first place. According to Paul, automation is especially pertinent to the marketing process:

“In this day and age, everything is at scale and growing. You should automate because there are only so many hours in the day and so many people you can pay.”

That said, not everything in marketing can be automated.

An Example of When and How to Automate on Facebook (7:15)

At this point in the podcast, pay close attention to what Paul does with his screen share as he’s going to walk through how to use Dynamic Creative with Facebook.

As Paul runs through the demonstration of how to set up self-optimising ads with Dynamic Creative, you’ll notice that there are indeed some parts of the process that shouldn’t be automated. Specifically, anything that requires a creative touch — the selection of images, the writing of copy — should remain in human hands.

But once your creative team has handled their part of the marketing process, Dynamic Creative can take the wheel. All you have to do is upload the copy, image and CTA variations you’d like to use for your Facebook ad. Then, let Facebook do the multivariate testing to see which combinations lead to the best results.

Once Facebook and Dynamic Creative are done, it’s your turn to step back in and look at the data that came out of testing.

Which combinations were winners? Which specific elements appealed to your target lists? How can you recycle the winning variables to run similar Facebook campaigns? It’s your job to decide how to optimise your ad spend with the data you now have in hand.

Tips for Planning Campaigns That Work (29:55)

Although Paul worked inside Infusionsoft for years, he believes the best place to plan campaigns is in your own experience planning tool (a Google doc works fine). This way, you have the ability to design everything from start to finish, with the freedom to pivot and makes changes as you like.

Only when it’s finalised should you place the elements of the campaign into your marketing automation platform.

There are two things you have to look at when laying down a new campaign:

Paul brings out the screen share to demonstrate this strategy with a couple of examples.

You’ll see in these campaign planning examples that they’re not always the most straightforward to execute.

The Simple Plan
In the simple plan, Paul demonstrates how to sell tickets to an event by:

The Advanced Plan
The advanced plan doesn’t have a linear structure like the event countdown one does. However, that doesn’t mean you can’t anticipate all the twists and turns and account for them when planning your campaign out.

In this example, Paul shows you how to define the various pathways that occur when attempting to remind clients about failed payments and then collecting those payments. And guess what? He doesn’t run this campaign solely through email. He uses a combination of Facebook ads, email, and phone along the pathway.

If you’re interested in automating something as complicated as this, be sure to watch this part of the podcast so you can see how Paul tackles the Failed Payment Pathway, Final Failed Notice Pathway and Successful Payment Pathway.

Paul suggests doing campaign planning outside of your marketing automation tool. However, what do you do with your campaigns when it’s time to build them out?

There was a lot I cut out of these show notes because I wanted to get you guys to the relevant bits about campaign planning and the awesome examples Paul laid out on his screen. However, if you want to hear more about Paul’s journey with Infusionsoft and BlitzMetrics, be sure to watch the episode in full.

And if you’re interested in learning about campaign planning, be on the lookout for Part 2 where Paul and I discuss list hygiene.

You can reach out and thank Paul Sokol on Facebook.