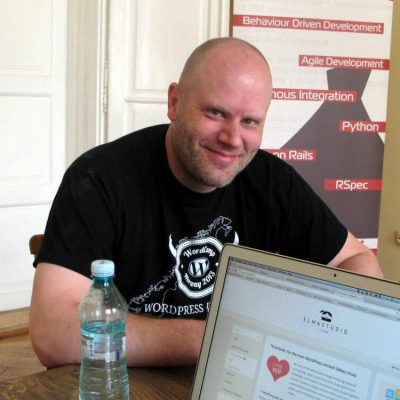 Our guest for today’s show is Remkus de Vries, all the way from the Netherlands. Remkus is an avid WordPress user and utilizes it in his business for large business and enterprise websites. It’s been a long time coming, but we finally got him on the show (he’s much taller in person, we promise!)

Today, Remkus shares some insights about how he got hooked on the Internet and WordPress, how to self-hypnotize, and how to avoid getting too invested in one’s own stress.

This week we are giving away a book, The Synchronicity Key (which Remkus is reading at the moment). To enter the competition, leave a comment below and tell us the mantra or affirmation that keeps you focussed.

Update: Congratulations DoctahJ! Remkus has chosen you as the lucky winner! Thanks for your contribution and keep elevating!

Remkus has made a substantial name for himself in the world of website creation and is a force to be reckoned with!

Early in his life, Remkus wanted to be a marine biologist, due to a close relationship with his uncle and a love of nature. But that soon gave way to an interest in the Internet and technology. Remkus lived in the US for a time, and upon moving home to the Netherlands, received a letter containing a friend’s email address. He was stunned by the realization that all mail did not have to be “snail mail”, and so began his quest to explore the vast world of the Internet.

Remkus didn’t instantly realize this new venue of communication could help him. Growing up, his family owned an automobile repair shop, which he ultimately considered to be his future. The Internet became a hobby, and Remkus began making money online making model websites for friends. Referrals helped his business grow, but it stayed a low-key business, as he was a project manager for an insurance company.

In 2005, Remkus discovered WordPress and discovered how straightforward, interactive and user-friendly it is. Soon after, every site he created was transferred into WordPress. He is now a WordPress specialist and – most importantly – a business owner.

Remkus owes his success to many things but credits his ability to “turn off” worrying as a substantial advantage. He says he does not waste his time worrying because it is useless, and only clouds your mind. He also sustains an interest in NLP (Neuro Linguistic Programming) and is even an avid self-hypnotist.

He has an extensive list of credits, but he enjoys appearing and speaking in public because he is knowledgeable about his subject matter and doesn’t feel insecure about speaking in a crowded situation.

Remkus is a jack of all trades and enjoys other hobbies besides WordPress and hypnosis. He has a family with three children and enjoys anything automobile related, particularly Mercedes. In addition, he is also an avid strength trainer and he enjoys getting out of his mind and focusing on something physical!

I wanted to be good at a lot of things. – @DeFries

Q: What’s the #1 thing any freelancer needs to know?

A: How to sell himself.

A: Produce quality. It’s an indirect one, but it’s very direct when it matters.

Q: How do you stop competing on price?

A: Don’t overdo it. That’s assuming that you know how to write an elaborate proposal. Don’t write those 25-30 pages things I’ve seen. Be certain that what you put in there is necessary. It’s basically you selling you instead of you listing what needs to be done.

A: Primarily we use ActiveCollab.

Q: What’s the best way to keep a project and a client on track?

A: Understand what scope creep is. Have an agreement on when it is creeping. Be active with the client. You already have the client. He’s not going to run away.

Q: Any ideas for getting referrals from existing customers?

A: Deliver what you say you’re going to deliver.

Q: What’s the #1 thing you can do to differentiate yourself?

A: Think before you need to think. Assume that you’re going to get a more difficult question than you’re prepared to answer.

Remkus suggests we interview Daniel Koskinen from Finland. Koskinen has his own agency and a different personality than Remkus. We’re coming for you Daniel Koskinen, keep an eye on your inbox!

Hint: to enter the competition, leave a comment below and tell us the mantra or affirmation that keeps you focussed.