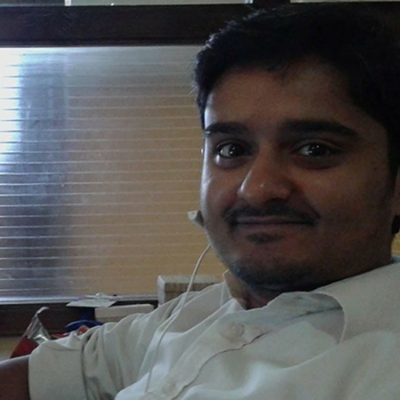 Our guest for today’s show is WordPress web developer, SEO expert, and Community Manager at Cloudways, Ahsan Parwez. Ahsan shows us how to get clients the easy way – by building relationships.

The most appealing aspect of WordPress... is the community @AhsanParwez - Cloudways

Ahsan is giving away a $75 credit towards the Cloudways hosting service. To enter, leave a comment below and tell Ahsan what is the #1 thing you look for (or would like to see) in a hosting platform? Ahsan will come back in a couple of weeks to pick a winner!

Update: Congratulations David and Ken! Ahsan has chosen the two of you as the lucky winners and decided to split the prize! Each will be receiving $40 hosting credit to Cloudways. Thanks for your contribution and keep elevating!

Growing up in Pakistan, Ahsan wanted to be a superhero! Since all those positions were filled, he ventured into robotics at an early age, and actually created a fully functional robot prototype.

Around 1997-98 his brother introduced him to the internet – on a 15kbps dial-up connection. It was achingly slow, but it allowed Ahsan to explore gaming and other things. It was then that he realized he might be able to make money online someday.

Later he discovered SEO, and after he graduated college, he got hired as an SEO engineer in 2011 by a company in Pakistan. One of his tasks there was to look for free blogging platforms, and that’s when he discovered WordPress.

Ahsan says the most appealing aspect of WordPress, aside from the incredible array of plug-ins, is the community. The vibrant community of people around WordPress is what really drew him and showed him how powerful it is as a solution.

He got his start building websites when a friend, who was starting a business, asked him to build one for him. Of course, he built it in WordPress. And that’s when Ahsan discovered the real value, and the opportunity, of the WordPress forums and community.

The relationships he has built within the community have been priceless. Today, as the WordPress Community Manager for Cloudways, his job is to answer questions, build relationships and build a community of users around their cloud hosting platform solution.

There is so much more to this episode with Ahsan, so stick around and listen to all of it! You’ll be glad you did.

Please join us in thanking Ahsan for being with us today, and thanks to you as well for joining us. We’ll see you next time on WordPress Elevation.

Q: What’s the #1 thing any freelancer needs to know?
A: If you are new to freelancing, keep your hopes up. It’s a saturated market, so make some connections with people. Go to WordCamps.

Q: What’s the best thing you’ve done to find new customers?
A: I went to Twitter and found tweets of people having trouble with their hosting service. Scored about 20 sign ups from a few tweets! Keep your eyes open and monitor your competitors.

Q: How do you stop competing on price?
A: Build relationships with people. Build trust.

Q: Any tips for writing better proposals?
A: I write personalized and short messages. You can introduce yourself and your company.

Q: What’s the best way to keep a project and a client on track?
A: Make sure you meet your deadlines, and communicate clearly.

Q: Any ideas for getting referrals from existing customers?
A: These are the best conversions actually. We have a few clients that answer prospect’s questions. They give reviews and write blog posts for us as well.

Q: What’s the #1 thing you can do to differentiate yourself?
A: I’m always looking at the back end and how the speed of a website can be improved.

Hint: to enter the competition, leave a comment below and tell Ahsan what’s the #1 thing you look for (or would like to see) in a hosting platform?