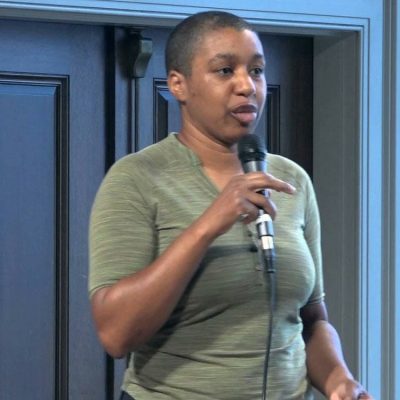 Nervous about presenting in front of large audiences? Worried about going it alone as an entrepreneur? Join us this week as our guest, web developer and founder of Karvel Digital, Kronda Adair speaks about her experiences trying out entrepreneurship for the first time. We also discuss where her success as a leader comes from, and how she used her love for Xena: Warrior Princess to learn more about web development on this week’s episode of WP Elevate!

I help businesses get more customers without being overwhelmed by technology. @kronda

Kronda is giving away 20 free copies of her fourth book, The Karvel Digital Guide to Websites That Work, before it comes out this fall! Need a copy now? To enter, leave a comment telling us the #1 thing clients need to know before they hire a web professional.

Congratulations to the six lucky listeners who answered Kronda's question and entered the competition. Kronda has decided to award you all a free copy of her fourth book, The Karvel Digital Guide to Websites That Work the We'll be in touch shortly! August 6, 2015

Kronda Adair, a founder of Karvel Digital, joins our podcast from Portland, Oregon. As a kid, she knew she wanted two things from her future career: to be the boss and to make a lot of money doing it. She first discovered the Internet around 1998. Using her dial-up connection, she set up her first AOL account and joined the chat rooms, mostly ones surrounding the Xena: Warrior Princess. By doing so, she learned more about programming after asking others in the chatrooms about their experiences.

I revamped everything in my business.- @kronda

It was a decade later when Kronda first found WordPress in 2009. She even went to WordCamp that year to learn more about it. At time, she ran a Blogger website but quickly made her first WordPress webpage before going to the convention so she could have it on her application. And just like almost all of our guests on the show. She has been a fan of WordPress ever since.

After working with a web developer and liking his work-from-anywhere lifestyle, she realized she wanted to do the same thing: design websites professionally. She went to The Art Institute of Portland and earned a BS in Web Design and Interactive Media, graduating in 2011. After working her way up in a few businesses, she almost lost hope of success after being let go. Instead, she took the opportunity to start her own business and has seen success with Karvel Digital ever since.

It was a lightbulb moment. There was no looking back.- @kronda

Kronda also enjoys public speaking so she can share her wealth of knowledge with others. She isn’t afraid of public speaking because she values what she shares, more so than she fears sharing it with a large crowd. If you’re curious about her speech topics check out the main page of Karvel Digital’s web site; there’s a video of a talk she gave about the different mistakes businesses are making with their web sites.

When Kronda is not working, she is enjoying her time at home working on projects around the house. Her most recent project is the newly planted garden bed in her backyard. She also runs a Twitter account for her cat @stateofthecat and is an avid cyclist, toting five different bicycles! Her goal is to leave the computer and her work behind for just a few days to fully enjoy Hawaii with her wife of almost a decade.

This is what the pros do? Great, that’s what I’m going to do. - @kronda

Join Kronda Adair and the usual team on today’s show as we look closer at how education in the field of web design has evolved, how she realized working under others was not for her, and how to get even the busiest of clients to see the value of a great website in this week’s WP Elevate!

Q: What’s the #1 thing any freelancer needs to know?
A: Their value.

Q: What’s the best thing you’ve done to find new customers?
A: Be me.

Q: How do you stop competing on price?
A: Engage in discovery and research.

Q: Any tips for writing better proposals?
A: Do discovery and write about all their pains, the pains they told you about in their proposals.

Q: What’s your favorite CRM tool?
A: I hooked my gravity forms to Trello. I’m also trying out Nimble.

Q: What’s the best way to keep a project and a client on track?
A: Weekly standing meeting.

Q: Any ideas for getting referrals from existing customers?
A: Make them happy and then ask.

Q: What’s the #1 thing you can do to differentiate yourself?
A: Just be yourself!

I’m going to make your life easy, not be a pain in the neck - @kronda

Kronda suggested I interview Tamala Huntley who runs her own WordPress-based business. Tamala, keep your eyes on your inbox.

Hint: to enter the competition, leave a comment below telling us the #1 thing clients need to know before they hire a web professional.