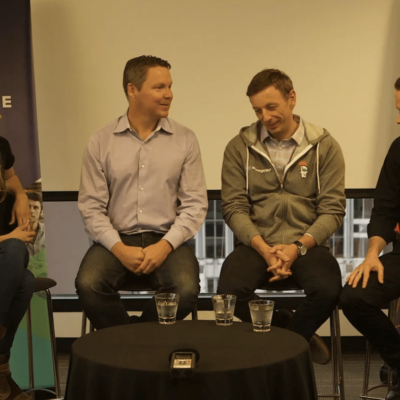 with Jeff King and Vladimir Prelovac

The rise of ManageWP was a brilliant success story. From humble beginnings in his home in Serbia, Vladimir Prelovac created one of the premier platforms to help developers and designers manage WordPress websites for their clients.

But many of Manage WP’s users were shocked when, a few months ago, Vlad announced his business was being acquired by GoDaddy – a web host with a not-so-stellar reputation in the industry. Why would ManageWP take such a sudden change in direction?

About a week ago, Kristina Romero and I sat down with Jeff King from GoDaddy and Vladimir Prelovac of Manage WP to ask just that. In this episode of the podcast, you’ll learn everything you wanted to know about the acquisition and the radically new direction ManageWP and GoDaddy are taking

For this week’s show, I sat down with one of WP Elevation’s business coaches, Kristina Romero, to speak with Jeff and Vlad. We started off by asking them about their backgrounds.

Now, if you’ve ever used ManageWP, you probably already know about Vlad and how he became an entrepreneur. But just in case you haven’t, here’s the scoop: he was working as a developer in 2007 when he quit his job and decided to start a blog. Like so many of us, he tried out a number of different platforms until he found WordPress. It felt so natural and easy to use, he was hooked. From there, was inevitable that he would branch out into creating plugins, becoming a consultant, and even authoring books on the subject.

Now, he’s the head of ManageWP, a simple and elegant platform for automating workflows and keeping clients’ WordPress sites up to date.

Jeff, on the other hand, has a very different background. As a nerd growing up in Silicon Valley, he came of age during the dot com boom, working first at a small startup and then moving on to eBay, where he would spend the next 10 years managing the company’s products. When he was offered the opportunity to work at GoDaddy, his reaction was one that might seem strange to some of us: he knew the company had a poor reputation in the industry and saw that their products were “a disaster.” So he jumped at the opportunity to turn things around. After an exhaustive process of soliciting and listening to customer feedback, he began to reshape GoDaddy’s products from the ground up.

During this process, he kept one important idea in mind: small business owners are busy, and they need help. Most of them will hand off their web development to someone else as soon as they have the budget. So he wanted to do everything possible to support the market of designers and developers who would be supporting those clients on GoDaddy – naturally, ManageWP seemed to be the perfect partner for the job.

Why Did GoDaddy Acquire ManageWP?

At this point, I had to stop and ask, “Why would you buy ManageWP and not just build it yourself? And why would Vlad decide to sell?”

Their answers made a lot of sense – Jeff knew his team had the capability to build their own managed WordPress platform, but the team at ManageWP already had the experience and had already developed the solutions. GoDaddy could dramatically accelerate its strategy by acquiring a solution rather than engineering one themselves.

At first, Vlad told us, he was a little nervous about the offer. He’d heard what others had to say about GoDaddy’s services. But when he visited their Sunnyvale offices, he realized everything he thought about the company was wrong. He told us what the experience was really like behind closed doors – and it’s nothing like we imagined. If he stayed in Serbia, he knew his opportunities for growth would be limited, so he took a gamble and decided to say yes to GoDaddy’s offer.

Not that it was easy for his customers to accept. As soon as ManageWP announced the detail, the company’s blog blew up with negative feedback. Still, Vlad didn’t doubt he’d made the right choice. He left the negative comments online, telling his team simply: “Even if we were acquired by Apple or Tesla, there are still customers who would be upset.”

For his part, Jeff sees the acquisition as an opportunity to finally turn GoDaddy’s reputation around. We talked about Jeff and Vlad’s plans for the newly acquired business, including how ManageWP will continue to operate independently following the merger, how the company will prioritize new features and updates, and how the acquisition has changed ManageWP’s operations.

Questions from the Audience

We also took a number of questions from the audience, including:

During the rest of the session, we heard about Jeff’s relaunch of GoDaddy Pro and how it will help connect small businesses to the professionals they need to scale up their businesses – rather than simply relying on word of mouth.

We also learned about GoDaddy’s “secret weapon” – its 3,500 member customer support team – and how they’ve dramatically changed their training and certification to provide world-class support to every customer.

Finally, Jeff and Vlad gave us a sneak peak into what we can expect in 2017 from GoDaddy Pro and ManageWP.

Just listen to the podcast or watch the video for the full details.